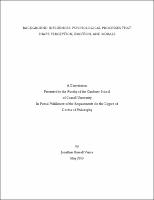 In this three chapter dissertation, I address the epistemic significance of psychological processes that shape emotion, perception, and moral judgment. In Chapter 1, I illustrate ways in which perceptual and emotional states can be influenced by background beliefs in a process called 'cognitive penetration'. I then use cases of cognitively penetrated emotion to provide a novel argument by analogy against views of perceptual justification (e.g. dogmatism) that emphasize the justificatory role of an experience's phenomenology rather than its etiology, including etiologies involving cognitive penetration. In Chapter 2, I extend the challenge from cognitive penetrability to target reliabilism, a view that emphasizes the justificatory role of etiology rather than phenomenology. In my view, both phenomenology and etiology have a role to play in fixing the justification provided by perceptual and emotional states. In Chapter 3, I turn to the covert influence of morally irrelevant factors on emotion and moral judgment. Recent authors have used empirical evidence of the influence of such factors to argue for the skeptical conclusion that intuitive moral judgments are unreliable. In response, I argue that the data indicate that the influences are too small to threaten the reliability of the relevant judgments, and in fact may provide novel support for an empirically plausible, moral epistemology that gives perception-like moral emotion a role in justifying intuitive moral beliefs.