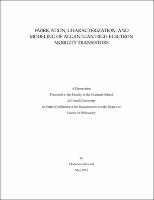 Initially, advances in the high frequency markets were begun by work in Gallium Arsenide systems. In recent years, however, the focus has shifted to the promise of ever higher power at ever higher frequency with the emergence of wide bandgap group III-V semiconductors, including Gallium Nitride. One area receiving attention is that of novel passivation materials for the active areas of AlGaN/GaN devices. Passivation is a critical issue because surface trapping effects are essentially unavoidable, even with the highest queality epitaxial layers, due to the polarized nature of the material. The question then becomes, which passivation materials offer the best mitigation of surface trapping effects with the least impact on parasitic elements detrimental to device performance. In this work, AlGaN/GaN devices passivated with AlSiN for both high frequency and high power operation are studied. The high frequency devices were fabricated alongside devices passivated with SiN, a standard passivation material, and characterized for both small signal and large signal performance. The AlSiN passivation was found to enhance both small and large signal performance, and so another set of devices was fabricated with high voltage, high power switching as the intended application. These devices were characterized for off-state breakdown, which was more than 4 times that of typical SiN-passivated devices, and time-domain and loadline measurements were performed.