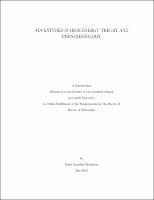 Various studies of high energy theory and phenomenology are presented. We first present a mechanism that naturally produces light Dirac neutrinos. The central idea is that the right-handed neutrinos are composite. Any realistic composite model must involve 'hidden flavor' chiral symmetries. In general some of these symmetries may survive confinement, and in particular, if a U(1) survives it must imply an exact B [-] L symmetry at low energies. Dirac neutrinos are therefore produced, which are naturally light due to compositeness. In general, elementary keV sterile Dirac neutrinos can be a natural ingredient of this composite neutrino scenario. For a certain class of composite neutrino theories, these sterile neutrinos naturally have the appropriate mixing angles to be resonantly produced warm dark matter (WDM). Alternatively, we show these sterile neutrinos can be WDM produced by an entropy-diluted thermal freezeout, with the necessary entropy production arising not from an out-of-equilibrium decay, but rather from the confinement of the composite neutrino sector, provided there is sufficient supercooling. We next present a formalism for the flavor oscillation of unstable particles that relies only upon the analytic structure of the time Fourier-transformed twopoint function. We derive exact oscillation probability and integrated oscillation probability formulae, and verify that our results reproduce the known results for both neutrino and neutral meson oscillation in the expected regimes of parameter space. The generality of our approach permits us to investigate flavor oscillation in exotic parameter regimes, and present the corresponding oscillation formulae. Kinematic edges in cascade decays provide a probe of the masses of new particles. In some new physics scenarios the decay chain involves intermediate particles of different flavors that can mix and oscillate. We discuss the implication of such oscillation, and in particular its interplay with the non-zero widths of the particles. We derive explicit formulae for differential decay rates involving both non-zero widths and oscillation, and show that in the case where the mass difference between the intermediate particles is of the order of their widths, both oscillation and width effects are important. An examination of the physical observables contained in these differential decay rates is also provided. We calculate differential decay rates for cases in which the intermediate particles are either scalars or fermions. Finally, we present flavor SU(3) sum rules for D [RIGHTWARDS ARROW] P P and D [RIGHTWARDS ARROW] P V decay amplitudes, that are valid to second order in symmetry breaking by the strange quark mass spurion. Decay rate sum rules are also computed to this order. Particular attention is given to sum rules arising from the isospin and U-spin subgroups, the former providing sensitive tests for alternative sources of SU(3) breaking. We apply the latter together with the postulated [INCREMENT]U = 0 rule for the large penguin picture to predict the ratio and difference of the direct CP asymmetries for D [RIGHTWARDS ARROW] KK * and D [RIGHTWARDS ARROW] [pi][rho].