Effects Of Simvastatin On Endothelial Cell Contractility And Barrier Integrity 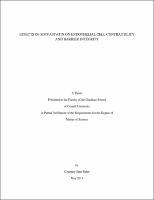