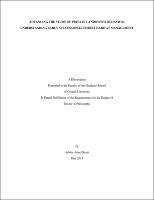 Wildlife conservation plans for the northeastern U.S. call for engaging private landowners in early successional forest habitat conservation; yet, corresponding social science research to understand landowner behavior is not available. In response, my dissertation advances understanding of landowner willingness to engage in even-aged management, which is often prescribed to create ESH. I applied the social psychological Reasoned Action Approach (RAA), along with typologies, to understand landowner behavior and suggest an effective approach to engage landowners. My research was based on a survey of landowners with 10 acres or more (n=1036) in the Southern Tier region of New York State, conducted in 2010-2011. The survey measured landowners' intentions to cut patches of trees of at least ½ acre and allow the cut areas to regenerate into ESH. I assessed the predictors of landowners' behavioral intentions according to the RAA. Further, I applied these cognitions, along with landowner motivations, to create, critically assess, and compare three distinct typologies for understanding the breadth of landowners. Finally, I explored whether types of landowners within each of the typologies would be likely to change their behavioral intentions with the application of learning, financial, or social tools. My results show that strategies to engage landowners in even-aged management for ESH will have the greatest likelihood of success if they focus on influencing attitudes and their associated beliefs, possibly focused on members of game wildlife organizations. Additionally, a behavior-based typology might be most useful for practitioners iii when determining how to reach out to different types of landowners; yet, I found that across all landowner types and typologies, learning tools were most likely to influence landowners' intentions to patch-cut, limiting the current need for different tools for different typologies. Only Continuing adopters would be influenced similarly by learning tools and basic needs tools. I detail the conservation applications of this work for conservation agencies, organizations, and initiatives, as well as the theoretical and methodological advancements for researchers. iv