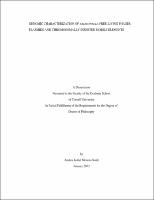 Salmonella is a globally distributed foodborne pathogen. Historically, Salmonella have been associated with multiple foodborne outbreaks. In the United States, Salmonella cause an estimated of 1 million cases, and is reported as the foodborne pathogen that causes the highest number of deaths and hospitalizations. Salmonella is a very versatile pathogen, with two species, S. enterica and S. bongori, and more than 2,500 serovars. Our current understanding of Salmonella serovars have shown that mobile elements, such as phages, plasmids and genomic islands have played a fundamental role in the evolution of this pathogen and in the emergence of endemic strains. Currently, sequencing technologies have improved dramatically, and its applications in the study of foodborne pathogens now just started being recognized. In this work we used next generation sequencing technologies to study a variety of Salmonella mobile elements, including free-living phages isolated from dairy farms, prophages inserted in the genome of several Salmonella serovars, plasmids, and chromosomally inserted transposons and genomic islands. Salmonella phages were isolated from 15 dairy farms, and were subsequently phenotypically (host range) and genotypically (genome size) characterized. We found a high abundance and diversity of Salmonella phage on the farms; phage diversity was represented by narrow and wide host range phages, and by a number of genome sizes. To obtain a better knowledge of the isolated phages, we selected 22 phages for whole genome sequencing. These phages were classified into 9 different clusters, including three novel clusters that represent virulent and temperate life cycles. We also identified phage-borne antimicrobial resistance, virulence, and DNA metabolism genes; finally we obtained some insights related with phage host specificity. Finally, to gain a broader picture of Salmonella mobile elements, we sequenced the genomes of 16 Salmonella strains, representing different serovars; followed by a genome-scale prediction of mobile elements. We identified four novel IncI1-IncFIB cointegrated plasmids, two resistance plasmids in the same isolate of Salmonella Montevideo, 42 prophages, two novel genomic islands, and an ICE encoding the Typhi type IVb pilus operon. This study represents the first comprehensive study of the "Salmonella mobilome", which included free-living phages, plasmids, and chromosomal elements.