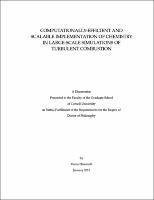 A major challenge in the numerical simulations of turbulent reacting flows involving large numbers of chemical species and reactions is the accurate and computationally-efficient representation of combustion chemistry. Recent advances on the experimental and theoretical fronts of the study of real fuel chemistry have led to more accurate chemical mechanisms of real fuels involving hundreds to thousands of species and thousands of reactions. However, the direct use of such detailed chemistry in large-scale calculations of turbulent reacting flows still remains computationally prohibitive. In our work, we focus on the combined Large-Eddy Simulation (LES)/Probability Density Function (PDF) computations of turbulent reacting flows, in which the thermochemical composition of the fluid is represented by a large number of particles. To reduce the cost of chemistry calculations in large-scale LES/PDF computations, we have developed a combined dimension reduction and tabulation approach in which the chemistry is represented accurately and efficiently in terms of a reduced number of "represented species". In this combined approach, the dimension reduction of combustion chemistry is performed using the Rate-Controlled Constrained-Equilibrium (RCCE) method, followed by tabulation using the In Situ Adaptive Tabulation (ISAT) algorithm. An automated Greedy Algorithm with Local Improvement (GALI) has been developed for selecting good rep- resented species for use in this approach. In addition, we have developed a Partitioned Uniform Random (P-URAN) parallel strategy for the efficient parallel implementation of chemistry in large-scale LES/PDF simulations on multiple cores. This strategy has been tested by performing full-scale LES/PDF simulations of the Sandia Flame D turbulent jet flame on up to 9,216 cores and it is found to achieve good scaling. In this work (1) we describe in detail the implementation of ISAT/RCCE/GALI and the P-URAN parallel strategy; (2) we show that the combined ISAT/RCCE/GALI yields orders of magnitude speed-up with very good error control; (3) we demonstrate that our implementation of RCCE is an accurate, efficient and robust implementation; (4) we show that the P-URAN parallel strategy achieves over 85% relative weak scaling efficiency and around 60% relative strong scaling efficiency on up to 9,216 cores; (5) we show that the combined ISAT/RCCE methodology with P-URAN significantly reduces the simulation time; and (6) a combination of ISAT/RCCE and PURAN algorithms enables us to perform accurate and computationally-efficient large-scale LES/PDF simulations with real fuel chemistry involving hundreds of chemical species.