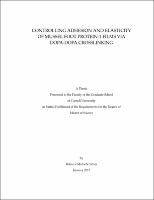 Adhesive proteins from marine mussels have long been studied for their potential biomedical applications. Mussels form strong, nonspecific, and permanent attachments to surfaces which allow them to maintain a sessile lifestyle in the ocean. Mussel foot protein-1 (mfp-1) forms the protective outer layer that coats the mussel's adhesive construct. It engages in both metal-coordination and covalent intermolecular crosslinks via 3,4-dihydroxyphenylalanine (DOPA) residues- the same side chains which are responsible for this protein's adhesion. In this study, the atomic force microscope (AFM) was used to investigate the effects of lowered DOPA availability due to crosslink formation on the adhesion of mfp-1 to a spherical silica particle. The natural crosslinking of mfp-1 was mimicked in vitro by adding Fe3+ , a cation which forms octahedral complexes between three DOPA groups, or NaIO4 , an oxidant which induces the formation of covalent diDOPA linkages. Before crosslinkers were added, mfp-1 demonstrated highest adhesion, an ability to spontaneously bridge an opposing surface, and long-range adhesion by extensible mfp-1 chains. Although crosslinks had not been actively generated, the presence of multi-molecular mfp-1 associations was apparent. With the addition of Fe3+ and NaIO4 , cohesion and elastic modulus of the protein films were higher, and adhesion was lower than in buffer. Neither crosslink allowed for spontaneous bridging. Only metal crosslinks allowed adhesion to be maintained over a long range. A direct correlation was evident between the availability of non-crosslinked DOPA residues and adhesion of the mfp-1 films.