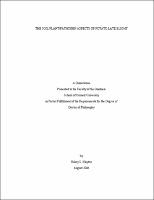 Oospores of Phytophthora infestans produced in vitro and in planta, were exposed to a variety of environments and their survival was assessed. Viability of oospores as measured by plasmolysis declined slightly over a period of 18 months whether they were stored in water at 4?C, in soil at 18?C, or in soil under natural field conditions. In comparison, viability as measured by germination was lower overall, but appeared to increase after storage in soil. Oospores produced in planta buried in the field were capable of infecting both tomato and potato leaflets when recovered after eighteen months, including two winters. Soil samples collected from the central highlands of Mexico (center of diversity for Phytophthora infestans) were evaluated for suppressive activity to P. infestans. A New York soil was used for comparative analysis. Even though both mating types are known to cohabit these regions of Mexico no evidence of oospores was found in the soil samples. No significant differences were observed between the Mexican and New York soils in terms of their influence on survival and infectivity of P. infestans. Bacterial diversity in the different soil types was investigated using terminal restriction fragment length polymorphism analysis (T-RFLPs). Foliar and tuber resistance to Phytophthora infestans were evaluated in a mapping population (n = 94) developed between two Solanum tuberosum breeding lines, NY121 x NY115. Foliar disease severity of the progeny clones was measured by the area under the disease progress curve (AUDPC) in field tests in 2004 and 2005. Correlation analysis of AUDPC values with amplified fragment length polymorphism (AFLP) molecular markers revealed that 56 %, 53 %, and 52 % of the quantitative phenotypic variance for resistance were associated with markers PCTMATC 184, PATMATA 171, and PATMACT 236, respectively, located on a chromosome V homolog derived from NY121 (p < 0.00001). The genetic component of tuber blight variance was much smaller than the foliar blight component, but still these three markers were correlated (p < 0.01 ? 0.10) with tuber blight resistance and explained 3-8 % of the variance.