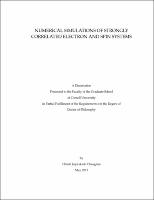 Developing analytical and numerical tools for strongly correlated systems is a central challenge for the condensed matter physics community. In the absence of exact solutions and controlled analytical approximations, numerical techniques have often contributed to our understanding of these systems. Exact Diagonalization (ED) requires the storage of at least two vectors the size of the Hilbert space under consideration (which grows exponentially with system size) which makes it affordable only for small systems. The Density Matrix Renormalization Group (DMRG) uses an intelligent Hilbert space truncation procedure to significantly reduce this cost, but in its present formulation is limited to quasi-1D systems. Quantum Monte Carlo (QMC) maps the Schrödinger equation to the diffusion equation (in imaginary time) and only samples the eigenvector over time, thereby avoiding the memory limitation. However, the stochasticity involved in the method gives rise to the the "sign problem" characteristic of fermion and frustrated spin systems. The first part of this thesis is an effort to make progress in the development of a numerical technique which overcomes the above mentioned problems. We consider novel variational wavefunctions, christened "Correlator Product States" (CPS), that have a general functional form which hopes to capture essential correlations in the ground states of spin and fermion systems in any dimension. We also consider a recent proposal to modify projector (Green's Function) Quantum Monte Carlo to ameliorate the sign problem for realistic and model Hamiltonians (such as the Hubbard model). This exploration led to our own set of improvements, primarily a semistochastic formulation of projector Quantum Monte Carlo. Despite their limitations, existing numerical techniques can yield physical insights into a wide variety of problems. The second part of this thesis considers one such numerical technique - DMRG - and adapts it to study the Heisenberg antiferromagnet on a generic tree graph. Our attention turns to a systematic numerical and semi-analytical study of the effect of local even/odd sublattice imbalance on the low energy spectrum of antiferromagnets on regular Cayley trees. Finally, motivated by previous experiments and theories of randomly diluted antiferromagnets (where an even/odd sublattice imbalance naturally occurs), we present our study of the Heisenberg antiferromagnet on the Cayley tree at the percolation threshold. Our work shows how to detect "emergent" low energy degrees of freedom and compute the effective interactions between them by using data from DMRG calculations.