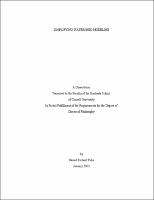 Obtaining representative meteorological data for an area, properly characterizing the physical characteristics of a watershed, and accurately representing the processes internal to watersheds can be complex. Several studies are presented that simplify the steps to obtain representative weather data, characterize the topography a watershed, and use this physical characterization to build a process based snowmelt model that requires no calibration to replace a calibration dependent temperature index based model. The objective of these studies is to present a suite of computational tools and proof of concept studies that simplify watershed modeling. First we present a method to quickly and easily obtain a 32-year record of meteorological forcing data for any location in the from the freely available Climate Forecast System Reanalysis dataset. Results from this analysis indicate that the CFSR data can reliably act as a first approximation of historical weather data over a watershed. The data consisting of precipitation, temperature, and other relevant weather information. Results show that using this dataset, can be as, or more, accurate than using weather records from the closest weather stations when using the Soil and Water Assessment Tool (SWAT) watershed model. The next two chapters describe two original software releases intended to provide watershed modeler with a suite of computational tools to better describe physical and chemical characteristics of a given watershed. The first, TopoSWAT, is a toolbox intended to characterize the topological properties of hydrological systems, and the second, SWATmodel, is an open-project porting of the legacy SWAT watershed model to be widely distributed and run as a linear-model-like function on multiple operating systems (OS) and processor platforms within the R language. These software packages have resulted in significant simplification of the integration of physical characteristics into the SWAT modeling system and have made the SWAT modeling framework available to more users in multiple environments including those scientists dependent on the Unix and Mac Osx based operating systems. The final chapter presents an integration example of the previous chapters, building a more process-based snow accumulation and snowmelt routine to replace the temperature index based routine in the aforementioned SWAT modeling system. The results of this integration show that spatial snow distributions predicted by a more process-based model better matched observations from LandSat imagery and a SNOTEL station, and requires limited extra effort when initialized using the previously described TopoSWAT toolbox.