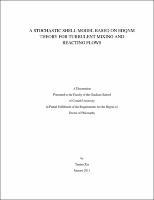 The probability density function (PDF) method provides an elegant solution to the closure problems of the highly-nonlinear chemical source terms. The instantaneous velocity, temperature and species concentrations are replaced by a high-dimensional joint PDF. Higher-order moments can be computed from this joint PDF. However, since the PDF model lacks two-point information, the effects of molecular mixing have to be modeled. Since the qualitative shape of the PDF is sensitive to the mixing model, especially when molecular mixing plays an important role, an accurate description of mixing is critical to PDF methods. Because molecular mixing is a multi-scale process, a spectral model is most desirable for it can naturally introduce all the length and time scales. However, it has difficulties in closing the chemical source term. A new model aiming at exploiting the advantages of the PDF framework and the spectral representation in a complementary way is derived. The eddy damped quasi-normal Markovian (EDQNM) model is chosen to provide the spectral information, and the stochastic shell mixing model (SSMM) based on the EDQNM model is able to supply the fine-grained joint PDF of velocity and scalars. A Monte Carlo scheme is used to advance the notional particles in spectral space. The Lagrangian statistics predicted by SSMM are in good agreement with direct numerical simulation (DNS). However, violation of the scalar bounds poses a challenge to the SSMM. An effective modification, called "zeroth" mode, has been proposed for an isotropic homogeneous system. Comparisons of the bounded SSMM have been made with DNS and they are in overall good agreement. Another work done in this thesis is the development of the EDQNM model for turbulent reacting fields, its comparison with DNS data and its application to study effects of different critical dimensionless parameters such as Reynolds number, Schmidt number and Damk¨ hler number. o