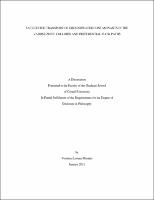 Although a wide variety of studies have been conducted to understand the numerous processes responsible for the transport of solutes and particulates through soils in order to prevent groundwater contamination, many gaps remain. This thesis presents the findings of two mechanisms (colloid facilitated transport and development of preferential flow infiltration) by which contaminants are able to expedite their transport through unsaturated soils (i.e., the vadose zone), easily reach deeper groundwater, and lower the filtering capacity of soils. The first study of this thesis bridges the gap between changes in polymeric characteristics of dissolved organic matter-colloid complexes induced by solution composition, and the effect these have on colloid transport through unsaturated soils. The second study presents a semi-empirical approach to improve existing models that predict attachment efficiency ([alpha]) of electrosterically stabilized suspensions moving through a porous medium using direct measurements of polymeric characteristics. The fourth study elucidates the capillary forces responsible for the transition between pinning or allowing particles to slip when they approach an air-water-solid interface. Lastly, bioclogging and soil-water repellency from dehydrated microbial exudates are studied in terms of biotic changes in structure and surface properties that generate points of wetting instability that can result in the formation of persistent preferential flow paths.