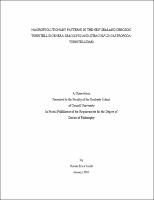 Gastropods have traditionally been extremely hard to construct phylogenetic relationships for because of the lack of easily coded morphological characters in their hard-parts. Many gastropod groups, such as the turritellids, are widespread and abundant in both the Recent and the fossil record, and other than the lack of available phylogenies are excellent candidates for addressing a wide variety of macroevolutionary questions, such as how new species occur. Here a new methodology for generating phylogenies for gastropods and other groups that have traditionally suffered the same problems is developed and applied. New algorithms implemented in the phylogenetic analysis software Tree Analysis using new Technology (TNT; Goloboff et al., 2006) allows the inclusion of continuous data directly into an analysis rather than requiring arbitrary gap coding to reduce the continuous character data to discrete character states. This method uses TNT's ability to analyze continuous characters to allow detailed descriptions of shell shape to be incorporated and analyzed as continuous characters generated from a geometric morphometric (GM) shape analysis. A test case for the methodology using Recent members of the hyper-diverse genus Conus, which has an exceptional molecular phylogeny, shows that GM-continuous characters generated from an eigenshape analysis can contribute to a phylogenetic hypothesis and allow the correct placement of taxa (such as fossils) that have only morphological data into a larger phylogenetic context. A phylogenetic analysis of the two New Zealand turritellid genera Stiracolpus and Zeacolpus carried out using suites of GM-continuous characters generated from whorl profile shape and traditional discrete characters has generated the first phylogenetic hypothesis of turritellid gastropods. These phylogenies indicate that species of both genera have significant ghost ranges. When these ghost ranges are taken into account, the pattern of species originations appears very different from the raw appearance data through the New Zealand Cenozoic, with speciation events clustering in four stages rather than occurring gradually. Paleoenvironmental data suggests that species of the two genera had different environmental tolerances, with Zeacolpus being less well able to survive in the cooler conditions that Stiracolpus appears to have thrived in during the Pliocene to Recent.