Detecting Motion Of A Nanomechanical Resonator Near The Quantum Ground State 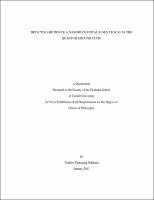 In the recent decade, tremendous amount of work has been done to probe the quantum properties of macroscopic mechanical devices. As a first step, researchers are racing to cool "large" mechanical objects to their quantum ground states. In this dissertation, I will describe the physics of the resolved sideband cooling technique used by our group to cool a nanomechanical resonator (NR) to its motional ground state. To this end we have fabricated high-Q NRs parametrically coupled to superconducting microwave coplanar waveguides (SR). We have been able to cool the motion of a 6.3 MHz nanomechanical resonator coupled to a 7.5 GHz superconducting resonator. Starting from a thermal occupation of ~500 quanta, we have observed mechanical occupation factors as low as 3.8 +/- 1.2 and expect the mechanical motion to be found with probability 0.21 in the quantum ground state of motion. I will describe the factors which are limiting further cooling and progress towards colder states of motion. By measuring differences in up and down-conversion of microwave photons in a process analogous to Raman scattering, we expect to observe fundamental quantum behavior of the nanomechanics. Furthermore, using a backaction evading configuration for our system, we should in principle be able to squeeze one of the quadratures of motion of the NR below the standard quantum limit. The results of this dissertation and the future works indicate the path forward for future experiments that prepare, detect and manipulate non-classical states of NR motion.