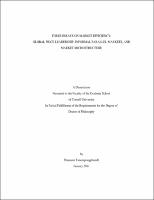 This dissertation tackles the concept of market efficiency from three distinct topics in applied economics, from microfinance, to agriculture commodity market, and further to market microstructure of the most advanced economy. The first essay, entitled "Market Efficiency and Price Discovery Among Leading Rice Exporting Countries", focuses on the issue of rice market efficiency. The study establishes, under Johansen's procedure, that there are long-run price co-movements existing among the three major rice-exporting countries, and within the United States domestic markets, the long-run efficient linkage between spot and future prices of rough rice, as Chicago Board of Trade rough rice futures converge to United States Department of Agriculture rough rice prices in a cash market. Regarding the efficiency among the export market prices, results show that the hypothesis of market efficiency are rejected in two of the three pairs, namely Thai-Vietnam and ThaiUS(Arkansas). The Gonzalo &amp; Granger (1995) decomposition method finds that the Thai and United States rice are dominant in the price discovery process. Within the United States domestic markets, the dominant is the futures market followed by the cash market of the rough rice and then the milled rice export price. The second essay, entitled "Determinants for Formal Credit and Informal Credit Access: The Case of Thai Farm Households", examines determinants for Thai agricultural households' participation in formal and its informal parallel credit markets. The study follows Heckman's two-stage selection model (1979) approach to determine the informal loan participation of Thai agricultural households. Results reveal that households tend to 'stick' to the credit market in which they were previously engaged. This finding reinforces the vicious cycle which makes it more difficult for farmers to get out of debt. Secondly, the study finds that wealthier households are less likely to access credit, and are more likely to participate in formal credits than their less wealthy peers. Results also show less probability of credit access between May and December coinciding with the planting and harvesting season accentuating the nature of loans as working-capital rather than consumption loans. Finally, the study discovers that households with owned farmland are more likely to participate in the formal credit market, while households with rented farmland are more likely to participate in the informal credit market stressing the use of owned land as collateral to participate in the former. The final essay, entitled "On the Challenge of Testing Weak-Form Market Efficiency using High Frequency Data", explores the issue of efficiency in microstructure of the Exchange-Traded-Fund (ETF). This essay shows that the profitability of a simple technical trading strategy hinges heavily on the way the Trades And Quotes (TAQ) dataset is filtered for mistakes and outliers. This paper uses ultra-high-frequency TAQ data that cover the time-span since the inception of the S&amp;P 500 ETF from January 1993 to December 2006. First, a widely used filtering methodology proposed by Hasbrouck (2003) is adopted. Under this methodology, the technical trading strategy clearly outperforms the buy-and-hold benchmark. However, when a more appropriate (stringent) filtering methodology is used, the technical trading strategy clearly underperforms the buy-and-hold benchmark. This evidence suggests that studies that based their methodology on Hasbrouck's (2003) less stringent filtering criterion could produce misleading results.