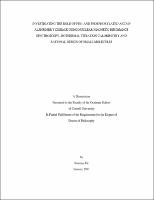 Alzheimer‟s disease (AD) is a progressive neurodegenerative disorder caused by the degeneration of synapse and neuronal cell death in brain. The hallmarks of AD are "amyloid plaques" and "neurofibrillary tangles". The amyloid plaques contain deposits of A[beta]-peptide and the neurofibrillary tangles contain hyper phosphorylated tau proteins. Recently it has been found that the soluble oligomers (dimers, trimers and tetramers) of the A[beta]-peptide are the most neurotoxic. The A[beta]-peptide is generated by proteolytic processing of Amyloid Precursor Protein (APP). In fact, APP undergoes proteolytic processing by two competing pathways: amyloidogenic pathway, which produces the toxic A[beta]-peptide and non-amyloidogenic pathway, which is the major pathway in a healthy brain. Identification of the signaling events that regulate APP processing pathways and A[beta]-peptide levels in the cell is one of the key questions in AD research. Phosphorylation of T668 in APP intracellular domain (AICD) is an important signaling event that regulates APP processing. T668 phosphorylation results in the partitioning of pT668-P669 peptide bond into cis and trans isomers. The slow isomerization of these isomers is catalyzed by the only known human enzyme Pin1. Pin1 plays a neuroprotective role in AD. This work attempts to elucidate how Pin1‟s enzymatic action influences the phosphorylation dependent signaling in AD. Combined NMR and ITC methodologies were used to determine kinetics and thermodynamics of pAICD:Pin1-WW domain interaction. These studies led to the derivation of a mathematical framework that predicts the impact of isomerization rates on the effective binding affinities of isomer-specific interactions and on the timedependence of concentrations of isomer-specific complexes that could serve as entry points into modular protein interaction networks in the cell. Pin1 activity is proposed to act as a switch that connects and modulates flux through cis/trans isomer-specific interaction networks which are otherwise insulated in its absence. This work offers for the first time a direct molecular mechanism to explain the known influence of Pin1 activity on diverse cellular functions under normal and disease conditions. Furthermore, peptide analogues were designed and synthesized for cis and trans isomers of pAICD. These analogues are currently being used to identify the isomerspecific binding partners in the cell.