Effects Of An America Cue On Intergroup Attitudes, Beliefs, And Behavior 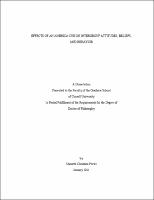 Each day, the citizens of the United States of America are likely to be reminded of their nation in any number of subtle ways. What are the effects of this reminding? In the present work, sixteen experiments are reported in which there is converging evidence that a subtle reminder of America leads to bias against outgroups despite that Americans, in general, and in the present study, appear to associate America with egalitarianism. Evidence for bias was found on both implicit and explicit attitudes measures, and was directed toward the outgroup at both the group and individual level. Moreover, the consequences of these attitudes included feelings of psychological distance from the outgroup, reduced support for an African-American political candidate, and poorer ratings for an African-American job candidate. The potential mechanisms for both explicit and implicit effects of a reminder of America are discussed.