Branched Chain Fatty Acids In The Neonatal Gut, And Estimated Prevalence In The American Food Supply 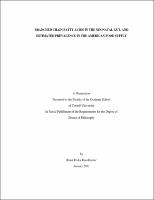 Branched chain fatty acids (BCFA) are found at trace levels in most non-ruminants, but are major components of vernix. Vernix suspended in amniotic fluid is normally swallowed by the fetus, increasingly so as parturition approaches. The first study investigated whether BCFA are a component of the newborn gut by measuring BCFA distribution in vernix and meconium of newborns. Results indicated that BCFA are normal constituents of the term newborn gastrointestinal (GI) tract. Furthermore, differences found in the BCFA distribution between vernix and meconium suggest that the fetal gut metabolizes BCFA. Given that BCFA are constituents of the newborn GI tract, the second study examined whether lack of GI exposure to BCFA, due to premature birth, is associated with the risk for necrotizing enterocolitis (NEC). Rat pups fed rat milk formula with BCFA had less NEC compared to pups fed a standard formula. A three-fold increase in the ileal anti-inflammatory, IL-10, was also detected in the BCFA-fed group. BCFA were selectively incorporated into ileum phospholipids. These results indicate that BCFA have a protective effect against NEC and that this effect may be due to increased ileal anti-inflammatory cytokine levels. This suggests that BCFA are metabolized in the ileum, where they may be associated with the reduction in NEC. As data on possible beneficial roles of BCFA emerge, their presence in the US food chain becomes valuable. The third study examined BCFA distribution in retail milk a major contributor to energy intake among most segments of the population. BCFA were found to comprise 2% of the total FA in retail milkfat and estimated intake suggests that BCFA can constitute a substantial amount of daily fat intake. These studies indicate that BCFA are normally present in the human gut throughout the life cycle and may be beneficial to human digestive health. They are native to the American diet and appear to help maintain perinatal gut health. These results invite continued consideration of the health effects of BCFA in human nutrition, and particularly inclusion in preterm infant formula. Their estimated intake in the American diet suggests that future studies explore their possible health benefits.