Pulsars And Their Environments: The Interactions Between Pulsar Emission, Matter, And Gravitational Waves 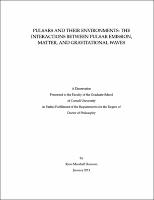 We investigate the interaction between radio pulsars, gravitational waves, warm plasma in the interstellar medium, and gravitationally bound matter, the latter three are liberally defined to comprise part of the pulsar environment. To examine the interactions between pulsars and their environments, we undertook observations at radio and infrared wavelengths which were supplemented by analytical and numerical modeling techniques. We assess the sensitivity of an ensemble of ultra-stable millisecond pulsars (a pulsar timing array) to gravitational waves. We find that there are a number of sources of noise, both intrinsic and extrinsic to the pulsar that limit timing array sensitivity. We show that spin noise in millisecond pulsars is fundamentally similar to that in normal pulsars and is present at levels that limit the sensitivity of a timing array even though it is latent in current timing observations. We identify the presence of broad band pulse jitter in observations of the millisecond pulsar J1713+0747 that limits its timing precision when observed at high signal to noise ratio. The properties of a plausible debris disks around the millisecond pulsar B1937+21 are constrained and in this context pulsars are identified that are more suited to long term precision timing. Through simulation, the levels of most forms of interstellar timing noise are identified. We demonstrate that careful choice of observing strategies and more advanced modeling of pulse times of arrival can reduce markedly improve timing precision. We conclude that observations of more pulsars, observed with higher throughput are required to make a significant detection of gravitational waves. In addition, pulsar emission is studied through the lens of their environments. We use multi-path scattering of pulsar radio emission in the interstellar medium to form an effective interferometer and resolve the emission region of PSR B0834+06. We also test the theory that certain forms of pulsar modulation are caused by in-falling material by constraining the presence of debris disks around four variable pulsars. We conclude that pulsars and their environments are inextricably linked and that detailed study of either necessarily requires intimate understanding of both.