Short Term Evolution In The Immune Response Of Drosophila Melanogaster: Insights From Studies Of Population Genetics And The Epidemiology Of Bacterial Infection 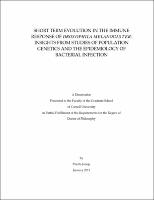 Studies of natural populations reveal that tremendous phenotypic variation in immune function exists within species. Selection on extant variation drives the short term evolution of the immune response, potentially resulting in the temporary maintenance of genetic variation in populations or in the fluctuation of allele frequencies. Immune response genes also frequently show evidence of elevated rates of adaptive evolution between species. I used two approaches to study how genetic variation within a population is related to long term evolutionary patterns. From an in-depth study of the pathogen recognition molecule Eater, I find evidence for a recent partial selective sweep in a single population of Drosophila melanogaster. The putatively selected allele has a significantly higher level of gene expression, suggesting that gene regulation rather than protein structure is the target of selection. In a broader study of over 200 immune genes using target enrichment and high-throughput sequencing, I find that genes with the highest rates of adaptive evolution between species have low levels of variation within a population. This suggests that selective sweeps, which reduce variation, occur in rapidly evolving genes. Genes that recognize infection and transduce signal within the immune response have low levels of variation consistent with selective sweeps, supporting the idea that these two aspects of the immune system are subject to elevated pathogen pressures. Our ability to understand the selective pressures that shape the antibacterial immune response is limited by our lack of knowledge about the epidemiology of disease in natural populations. I have performed a survey of natural bacterial pathogens in wild populations of D. melanogaster in Ithaca, New York, with the aim of understanding the rates, distributions, and identities of bacterial infections in the wild. I find that 0.3% to 2% of wild flies are infected with a diverse array of opportunistic pathogens. The identification and subsequent characterization of natural pathogens will lead to a better understanding of the selective pressures that drive the evolution of the insect immune response. A complete understanding of the evolution of resistance to infection requires consideration of the short term evolutionary dynamics measured through population genetics and phenotypic study of individuals and their pathogens within populations.