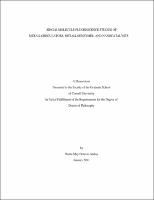 This work presents the development and application of single-molecule fluorescence-based methodologies to study bio-inorganic systems and catalysis of nanostructured materials. Single-molecule fluorescence microscopy was used to examine: (i) protein-DNA interactions using single-molecule fluorescence resonance energy transfer (smFRET), (ii) single-molecule enzymology of tyrosinase using fluorescence quenching via energy transfer, and (iii) structure-activity correlation of gold nanoparticle catalysis using super-resolution imaging. Engineered DNA Holliday junction (HJ) was used as the smFRET reporter for interactions of a metalloregulator, CueR, with DNA for transcriptional regulation. Both the apo- and holo-forms of CueR interact with and change the structures and dynamics of interconversion between the two conformations of the HJ. Singlemolecule kinetic analyses revealed differences between apo- and holo- CueR in their interactions with DNA. These changes observed on HJ upon CueR binding reflect the protein actions on DNA for regulating gene transcription. The single-molecule enzymology of tyrosinase was also investigated. Catalysis coupled fluorescence quenching (CCFQ) was used to monitor the state of the binuclear-copper active site of the enzyme. The intermediates of this metal center exhibit different absorption features as the enzyme goes through the catalytic cycle. Using a fluorescent probe whose fluorescence spectrum overlaps with the absorption spectrum of one of the intermediates of the active site, the state of the active site of the enzyme was directly monitored. The structure-activity correlation of single nanoparticle catalysts was achieved by applying super-resolution fluorescence imaging on single-particle catalysis. The generation of a fluorescent product from a non-fluorescent reactant on the surface of nanoparticles was imaged using single-molecule fluorescence microscopy. Precise nanometer localization of where the products are generated, with a resolution of ~25 nm, was obtained by fitting the point spread function of the emission of a product molecule with a two-dimensional Gaussian function. By taking the SEM image of the same nanoparticles and overlaying them to those obtained from super-resolution imaging, direct correlation of the activity and structure of nanocatalysts was achieved at the single-particle level.