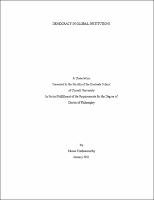 DEMOCRACY IN GLOBAL INSTITUTIONS Meena Krishnamurthy, Ph. D. Cornell University January 2011 A central criticism of global financial institutions such as the International Monetary Fund (IMF) and the World Bank (WB) is that they are insufficiently democratic. In particular, it has been suggested that they are not democratic because they utilize weighted voting and impose conditions on loans. In the IMF and the WB, votes are weighted by economic status. Richer countries such as the United States and the United Kingdom have more votes than poorer countries such as Burkina Faso and Bangladesh. The IMF and the WB also impose conditions, in the form of policy conditions, on the money they lend. Distribution of money is contingent upon taking up certain policies such as liberalization and privatization of the economy. I have two basic projects in this dissertation. The first and main project is to provide an explanation of why weighted voting and conditionality of loans are not consistent with foundational democratic values. The second project is to suggest some means of overcoming the deficit of democracy in global institutions in both current and future generations. In the first chapter of my dissertation, I develop an account of the value of democratic institutions within nation-states. The account that I argue for here is broadly Rawlsian. I follow Rawls in emphasizing the value of exercising our two moral powers as citizens (i.e., the capacity for justice and the capacity for a conception of the good) and the value of having a secure sense of self-respect as foundational democratic values. My arguments depart from Rawls's in two main respects. First, while Rawls emphasizes the cognitive aspect of our capacity for a conception of the good, I focus on the practical aspect of this capacity, arguing that experientially testing out our tentative ends and aims is integral to the formation of a rational conception of the good. I argue that exercise of this more practical aspect of the capacity for a conception of the good requires democratic decision-making procedures. Second, I move beyond Rawls's own arguments regarding self-respect, and argue that selfrespect is undermined when political arrangements are not conducive to the equal advancement of citizens' interests and that the equal advancement of interests requires democratic procedures. In chapter 2, using and extending the arguments that I develop in chapter 1, I explain why both weighted voting and conditionality of loans are not consistent with basic democratic values. My arguments here are largely negative. I consider what I take to be the most plausible arguments for weighted voting and conditionality of loans and I show that they fail. For instance, I argue against the claim that developed countries should have more votes simply because they contribute more funds to the IMF and the WB. I also argue against the suggestion that conditionality of loans can be justified on the basis of the IMF and the WB's similarity to corporate or private banks. In responding to these arguments, my aim is to show that weighted voting and conditionality of loans are incompatible with citizens' exercise of their capacity for a conception of the good and with their secure sense of self-respect. In chapter 3, I discuss the prospects that I find most promising in ending the deficit of democracy. I argue that there is a real challenge to democratic values that is not met by procedural mechanisms and that, at least in current generations, the solution is largely an economic one: egalitarian measures in the global economy will promote democratic values. Only when countries are closer to being economic equals can democratic values be expressed in global financial institutions. Until this point is reached, I suggest that it is best that global financial institutions be dismantled. Given that countries (particularly the poorer ones) will still need loans for growth and development, I also suggest that, for the time being, commercial banking and regional institutions should take the place of global financial institutions. However, things will not always be as they are. If egalitarian measures are pursued, then eventually countries will be much closer in economic status to one another. I argue that, at this point, global financial institutions will be better able to express democratic values and can be reinstated. Questions of procedure and policy now become important, for questions remain about how to distribute votes and what form loans should take. Using the domestic sphere as my model, I argue that votes should be distributed equally, and that majority rule should be used but, because of worries about persistent and predictable minorities, that it should be tempered by a bill of rights, bicameralism, and legislative districting. I also suggest that, because it is more consistent with democratic values, structural adjustment loans should be conditional on reaching desired outcomes, that is, outcomes mutually decided upon by borrowing countries and lending agencies (e.g., certain levels of growth, inflation, international reserves).