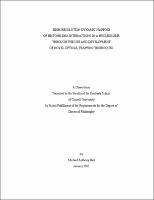 The nucleosomal barrier regulates access to the underlying DNA during many cellular processes. In Chapter 3, we present a detailed map of histone-DNA interactions along the DNA sequence to near base pair accuracy by mechanically unzipping single molecules of DNA, each containing a single nucleosome. This interaction map revealed a distinct 5-bp periodicity that was enveloped by three broad regions of strong interactions, with the strongest occurring at the dyad and the other two about ±40-bp from the dyad. Unzipping up to the dyad allowed recovery of a canonical nucleosome upon relaxation of the DNA, but unzipping beyond the dyad resulted in removal of the histone octamer from its initial DNA sequence. These findings have important implications for how RNA polymerase and other DNA-based enzymes may gain access to DNA associated with a nucleosome. Two novel optical trapping techniques are described in Chapters 4 and 5, respectively: the adaptation of the unzipping method to apply to new biological assays and a novel microfluidic flow cell compatible with single molecule optical trapping experiments. These developments expand the role that optical trapping plays in the study of biological questions.