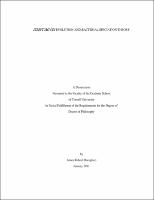 Classification of bacterial species and studying bacterial speciation are both difficult and necessary. Streptomyces is a genus of Actinobacteria; they have 7-10Mbase high G+C genomes, and produce the majority of clinically useful antibiotics. Genome sequencing has revealed overlooked biosynthetic potential, making many hopeful for a genome based surge in natural product discovery. Unfortunately, Streptomyces diversity is not well understood, and while there are 376 recognized species, many studies of the genus discuss 20 or so major clusters. Multilocus sequence analysis (MLSA) has been used recently to establish a foundation for the study of species and diversity within Streptomyces. We found significant interspecies recombination within one 53 species MLSA data set that affects >40% of the concatenated six gene sequences. An MLSA data set was also created for 38 isolates of Streptomyces flavogriseus phylogroup pratensis. The homologous recombination (HR) rate for this population was found to be very high for bacteria. We used the same 38 isolates to determine the uniformity of phenotypic traits within one Streptomyces population. We found that while carbon-source utilization was low compared to other bacterial species, it is not entirely uniform and is therefore not a diagnostic trait for Streptomyces species. Secondary metabolite production gene clusters were, however, very well conserved within this population. In a broader study of Streptomyces diversity, we examined streptomycetes isolated from 15 soil samples spanning Florida to Alaska. We found that it is possible to easily delineate Streptomyces species using MLSA data for populations. The species studied had very different recombination rates, ranging from clonal to highly recombinant. The theoretical study included in this dissertation addresses the effect of homologous recombination rate on divergence of bacterial populations. We have found that homologous recombination acts as a cohesive force, holding two populations together that would otherwise be on separate evolutionary trajectories. This cohesion is rate dependent, and because HR rate decreases as sequence divergence increases, there is a threshold above which there is no net population cohesion. This may result in two different sets of considerations when studying microbial ecology and diversity.