The Technological Imaginary of Imperial Japan, 1931-1945 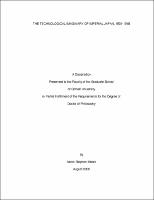 "Technology" has often served as a signifier of development, progress, and innovation in the narrative of Japan's transformation into an economic superpower. Few histories, however, treat technology as a system of power and mobilization. This dissertation examines an important shift in the discourse of technology in wartime Japan (1931-1945), a period usually viewed as anti-modern and anachronistic. I analyze how technology meant more than advanced machinery and infrastructure but included a subjective, ethical, and visionary element as well. For many elites, technology embodied certain ways of creative thinking, acting or being, as well as values of rationality, cooperation, and efficiency or visions of a society without ethnic or class conflict. By examining the thought and activities of the bureaucrat, Mori Hideoto, and the critic, Aikawa Haruki, I demonstrate that technology signified a wider system of social, cultural, and political mechanisms that incorporated the practical-political energies of the people for the construction of a "New Order in East Asia." Therefore, my dissertation is more broadly about how power operated ideologically under Japanese fascism in ways other than outright violence and repression that resonate with post-war "democratic" Japan and many modern capitalist societies as well. This more subjective, immaterial sense of technology revealed a fundamental ambiguity at the heart of technology. While many elites encoded technology as the production of all aspects of life, some articulated technology as unexpected invention, transformative action, and creative self-formation. Such possibility was found within the very technologies that systematically structured society. By examining the thought and activities of the philosopher, Nakai Masakazu, I illuminate another notion of technology as cultural practices of invention that tactically employed the technologies mobilizing everyday life. Thus, I also explore other notions of the political in a context where politics was increasingly incorporated into the wartime effort through technology.