Physical, Chemical And Kinetic Factors Associated With Fiber Digestibility In Ruminants And Models Describing These Relationships 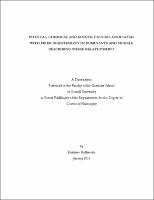 Various trials were conducted to improve the neutral detergent fiber (NDF), acid detergent fiber (ADF) and lignin (ADL) methodologies. Enhanced methods increased recovery of the fractions on average by 3%, 11% and 24% for NDF, ADF and ADL, respectively, among forage groups. The improved methods were also applied to both in-vitro and in-situ NDF digestibility methodologies. Since recoveries were higher for NDF residues at longer fermentation times (240 h), the estimation of the indigestible NDF was significantly impacted and recoveries increased from 0-75% among all forages and samples. To better define the indigestible fraction of NDF (iNDF), other approaches for in-vitro and in-situ trials were conducted to verify the in vitro studies. Results from all approaches demonstrated that the iNDF is a unique value for each sample and is not directly related to the chemical composition of the plant. This allowed for a better definition of the relationship between lignin and iNDF. A single value of 2.4 for the ratio iNDF/ADL, on NDF basis, was determined to be invalid for all forages and the ratio was determined to be more variable (between 1.73 and 7.59) and dependent not only on the amount of ADL, but also on the physiological stage at harvest of the plant and most likely the agronomic conditions the plant was grown in. Further, a study to evaluate the chemical linkages associated with altered digestibility found that the quantification of esterand ether-linked ferulic and para-coumaric acids, with the lignin explained most of the variation (up to 98%) of in-vitro NDF digestibility, rate and extent of NDF digestion, for all groups of forages, except for alfalfa. An experiment was also conducted in lactating dairy cows and confirmed the observations of ester and ether linkages and digestibility from the in vitro studies. The chemistry of the ADF fraction and not the NDF component in this case showed the most interesting and consistently negative correlations with the digestibility parameters. Finally, a mathematical model of NDF digestibility was developed by the estimation of fast and slow digesting pools of NDF, utilizing the improved data on iNDF. The model was developed using a visual modeling tool (Vensim) and a non-linear optimization. This was possible using a composite decay model and no more than two points from a NDF fermentation curve and a forage group-specific range for iNDF. This will allow a better description of the forages used by nutritionists and clarify the understanding of the variation observed in ruminant animal performance as it relates to the primary ingredient in their diet.