Between Humanism And Terror: The Problem Of Political Violence In Postwar France, 1944-1962 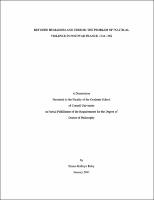 As the wartime German occupation of France came to a close in 1944, the French Resistance became a symbol of the heroic use of violence for a just political cause. The subsequent reconstruction of a republican France, which involved a protracted and sometimes bloody campaign to bring collaborators to justice, further cemented popular support for the selective use of political violence - even violence by non-state actors, even violence that targeted civilians - if it could be associated with memory of the struggle against Vichy. In this climate, leading postwar intellectuals on the French Left such as Maurice Merleau-Ponty and Jean-Paul Sartre articulated some of the most striking justifications for political violence, including revolutionary "terror," in the history of twentieth-century thought. But despite their prominence, these figures did not represent the views of all left-leaning French thinkers: over time, the use of violence in politics became the object of increasing unease and contestation, particularly as the exigencies of the liberation faded, Cold War fears grew, and new forms of "terror" - labor militancy, the Soviet gulag, torture and terrorism in the Algerian War (19541962) - came to the fore of political debate. This dissertation is an attempt to retell the history of France's postwar intellectual Left in a way that reintegrates those who decided between 1944 and 1962 that violence was not a legitimate means of effecting political change. Drawing on an extensive source base of published and archival materials, I show that the position that violence should be used to help build a more just society was maintained by some intellectuals on the Left but was substantively challenged by others. These latter figures - notably Albert Camus, David Rousset, and Jean-Marie Domenach - used what they self-consciously deemed "ethical" arguments to reject even those acts of violence committed for the sake of highly desirable ends. Their new discourses also drew on the memory of World War II, but instead of emphasizing Resistance heroism they stressed the suffering of victims. Meaningful action, they declared, need not involve violence: it could, rather, be a matter of "bearing witness" to violent assaults on bodily integrity and human dignity.