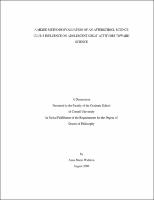 Attitudes toward science have an impact on how and what students learn, which directly influences student achievement and student self perceptions (Cannon and Simpson 1985, Oliver and Simpson 1988, Simpson and Oliver, 1990). Attitudes have been shown to affect achievement scores and student self-concept (Peterson and Yaakobi 1980, Cannon and Simpson 1985, Oliver and Simpson 1988, Simpson and Oliver 1990). This study explores student attitudes toward science in grades seven and eight at a rural school district in Central New York. Attitudes toward science are defined as "a general and enduring positive or negative feeling about science" (Koballa, Crawley, 1985, p. 223). Attitudes toward science were measured at three different times during the school year for all students in grades seven and eight. A girls' science club intervention program was implemented for those in grades seven and eight who self-selected to participate. The club consisted of two treatments, one featuring hands-on activities and the other featuring career and role model guest speakers who were scientists. Through a switching replications design implemented at mid-year, all girls experienced both treatments. A mixed methods approach was used to collect both quantitative and qualitative data concerning attitudes over time for girls participating in the science club intervention program. Quantitative data was collected for students not participating in the club to provide data comparative data. Quantitative results indicated differences in attitudes over time for all students when data was pooled across grade levels. Additionally, grade level differences over time were observed in grades seven and eight, with grade seven showing an increase in scores over time and eighth graders showing a decrease in scores over time. No significant effects of gender were found, although there was a gender trend observed over time. In the qualitative data, similar categories emerged over time in response to survey and interview questions. There were no major differences observed in survey responses from the beginning to the end of the year. No grade level differences were found in the categorical analysis of survey or interview responses. Qualitative data in some cases provided corroborating information in support of quantitative conclusions. In other cases, the qualitative data hinted at different conclusions. This study found that the science club intervention program did not have a positive effect on girls' attitudes toward science. Factors beyond the intervention including the school environment and achievement expectations appeared to have more of an influence on attitudes than the intervention program. Further study is needed to determine if this phenomenon would occur in future cohorts of students and also to continue to evaluate the effectiveness of science programs in both formal and informal settings.