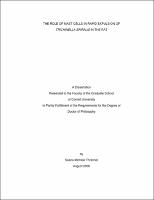 The aim of this research was to test the hypothesis that immune complexes activate mucosal mast cells to cause rapid expulsion of the Trichinella spiralis from the rat intestine. Rapid expulsion is a phenomenon in the rat that is characterized by nearly complete elimination of a secondary infection. To test this hypothesis, mast cells were cultured from bone marrow precursors. These cells have a homogenous mucosal phenotype and were compared with the mucosal mast cell line, RBL-2H3 cells. Each cell type was assayed for binding and activation by parasite specific immune complexes. The results showed that IgE- and IgG2a-containing immune complexes bound and activated RBL-2H3 cells, but only IgE significantly activated bone marrow-derived mast cells (BMMC). IgG1 and IgG2b immune complexes bound both cells types but did not trigger degranulation. IgG2c did not bind mast cells. Because IgG2a-containing complexes activated RBL-2H3 cells in vitro and this isotype differed from other isotypes in its mechanism for induction of rapid expulsion, we investigated whether this isotype might activate mast cells in vivo. Rats infected with Heligmosomoides polygyrus then passively immunized with IgG2a demonstrated rapid expulsion without significant mucus entrapment of larvae. IgG2a-mediated protection was complement independent and Fc-dependent; however, no significant increase in RMCP-II release was detected during expulsion. These results are consistent with a role for other FcR-bearing cells in IgG2a-mediated protection. In a parallel investigation, confounding inflammatory factors induced by oral infection were eliminated by assaying rapid expulsion induced by parenteral infection. Protection conferred by parenteral immunization was as potent as that induced by natural infection was more robust than the H. polygyrus model. Parenterally infected rats did not display intestinal mastocytosis, eosinophilia, or goblet cell hyperplasia; however, mast cells were activated and mucus entrapment of larvae occurred at levels comparable to those observed in rats infected naturally. Complement was not necessary for protection mediated by parenteral immunization.