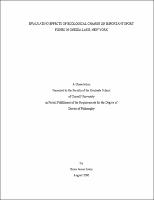 Aquatic ecosystems provide numerous resources to diverse user groups. As a result, these systems are often targets of planned management actions but are also sensitive to uncontrolled biological invasions. Oneida Lake has a rich history of ecological study across multiple trophic levels and has experienced notable perturbations to its food web during the past half-century. To evaluate large-scale ecological changes, I used multiple approaches to examine dynamics in several long-term data series. In Chapter 1, I quantified age-0 yellow perch density at four early life stages and calculated mortality and growth rates. At all stages, densities have declined over time. Mortality rates from egg to 18mm showed no time trend, increased for 18mm - 1 Aug., and decreased from 1 Aug. - 15 Oct. Depensatory mortality, prevalent in the 1960s to early 1970s, was not seen in recent years. Growth has increased, was density dependent, and was significantly correlated with increased Secchi depth. The combined effect has been a decline in abundance and an increase in individual size by the end of the first year. In Chapter 2, I combined three long-term data sets for walleye to simultaneously estimate mortality, catchability in gillnets and trawls, and density using a non-linear minimization routine. A multi-mortality model with two time periods suggested decreased fishing mortality but increased sub-adult mortality during recent years when more restrictive size limits were in place and double-crested cormorants were abundant. In Chapter 3, I used gillnet and bottom trawl catches to identify changes in fish abundance after zebra mussel colonization. Based on a priori expectations, I evaluated changes between pre- and post-zebra mussel periods and compared observed values with projections from 30-year population trajectories. Between periods, gillnet catches of Pelagic fishes declined while catches of Littoral and Benthic fishes increased. Population trajectories indicated declining percids; however, gillnet catches of smallmouth bass and pumpkinseed sunfish remained high throughout much of the zebra mussel period. Changing ecological conditions (increased water clarity, temperature, and macrophytes; altered nutrient pathways; and variable top predators) appear to favor a fish community shift away from percids and towards centrarchids.