Effective Hamiltonians of the pyrochlore antiferromagnet 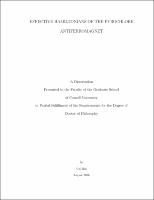 The pyrochlore lattice Heisenberg antiferromagnet is a highly frustrated model, and possesses, classically, a macroscopic continuous ground state degeneracy. We study the semiclassical limit of large spin length S and examine the effect of quantum fluctuations on the energy within various theories. In each of these theories, we focus on deriving an effective Hamiltonian, as a function of a small number of degrees of freedom. The effective Hamiltonian gives us a simple formula for calculating the energy and facilitates the search for a unique ground state among the large number of classical ground states. First, we consider the harmonic spin-wave theory, in which we keep only the lowest order (in 1/S) correction to the classical Hamiltonian. We perform a detailed analysis of the harmonic order spin-wave modes and, using a real-space loop expansion, produce an effective Hamiltonian, in which the degrees of freedom are Ising variables representing products of the classical spin directions around loops in the lattice. We find a family of exactly degenerate collinear ground states, related by gaugelike Z2 transformations and provide bounds for the zero-temperature entropy. We carry the spin-wave calculation to the next ?anharmonic? order in the 1/S expansion, utilizing a a self-consistent variational Hamiltonian approach, equivalent to Hartree-Fock approximation. We find that the harmonic degeneracy is broken, but there remain a large number of seemingly degenerate ground states. We develop an alternative approximation, employing the widely used, but not well controlled generalization of the SU(2) ?= Sp(1) theory to Sp(N), in the limit of infinite N. We develop an effective Hamiltonian for this mean-field theory, using an analytical loop-expansion. We find that in this case, the ground state of the large-N theory cannot possibly be the physical ground state in the limit S ? 1, since it is not a harmonic spin-wave ground states. Nonetheless, when restricted to the manifold harmonic spin-wave ground states, both the anharmonic spin-waves and the large-N theory result in similar effective Hamiltonian. We further demonstrate that the harmonic theory can readily be applied to determine the harmonic-order ground state manifolds of the Heisenberg Hamiltonian on related lattices, and to field-induced collinear magnetization plateau states.