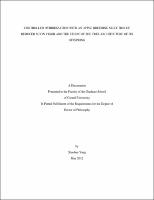 Selection 1, an apple (Malus xdomestica Borkh.) progeny of 'Fuji' x Co-op 18, was characterized by reduced stature and repeated occurrence of forks (lateral branches of the same length). Crossing Selection 1 with parents with contrasting architectures generated progeny 805 and 806. Forked branching and reduced internode length were transmitted from Selection 1 to some of its progeny. Clear segregation of dwarf plants was observed in progeny 806 in the first growing season. These dwarfs resembled 'sturdy dwarf' suggested by Alston (1976) and were controlled by two recessive genes (d1, d3). Fewer columnar plants and more intermediate types were present in progeny 805 than expected, a manifestation of interaction of different architectural types. Shoots were collected from apple cultivar 'Redcort' (on 'M.M.106' rootstock), as well as dwarf and standard plants (own rooted) from progeny 806. These shoot were treated with [14C]GA12. Twenty-one metabolites were identified and used as tracers for the purification of endogenous GAs. The existence of endogenous GA12, GA15, GA53, GA44, GA19, GA20 and GA3 was demonstrated by GC-MS, an indication that [14C]GA12 was metabolized mainly through the 13hydroxylation pathway. Dwarf and standard seedlings from progeny 806 produced similar metabolites from [14C]GA12, except for peak N, which was only detected in standard plants between 3 and 6 h. The metabolic rate in standard plants was almost double that of dwarf plants, which may be due to the low vigor of the dwarf seedlings or to low bioactivity of certain enzymes in the pathway. Exogenous GA3 and GR24 (a strigolactone analog) were applied to plants in progeny 806. Branches treated with GA3 had more new growth due to increased number of nodes as compared to control branches in dwarf plants. Decapitation was conducted before the application of GR24 to induce outgrowth of axillary buds. Different degrees of dominance were observed for shoots induced by decapitation in the greenhouse on population 28 (derived from open pollinated Selection 1), whereas for plants in progeny 806, shoots from bud 1 and bud 2 always became dominant. GR24 did not effectively inhibit branching in our study.