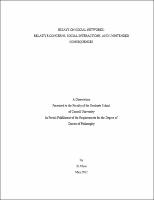 This dissertation is composed of a literature review, Chapter 1, an in-depth analysis of data used in the dissertation, Chapter 2, and three main essays, Chapters 3-5, on relative concerns, social interactions and unintended consequences. To uncover the nature of social interactions, Chapter 3 studies how rural residents form social networks, and what explains the recent gift spending escalation. Chapter 4 focuses on a typical market that carries significant social stigma - paid blood plasma donation in China. I explore the role of peer interactions in the networks. Building upon it, Chapter 5 evaluates how in utero exposures to frequent and costly social events for the impoverished families impacts early child nutrients intake and health status. Chapter 1 This chapter reviews the recent literature on inequality and income distribution in rural China utilizing panel datasets. On the basis of the review, this chapter identifies new research areas with existing panel datasets and my new household panel dataset, i.e., the IFPRI-CAAS, which could shape future research. Chapter 2 The tradition of keeping written gift record in many Asian countries offers researchers an old-fashioned but underutilized means of data collection for development and social network study. This chapter documents a long-term spontaneous household gift record I collected from the field. I discuss the data collection and network structure, highlighting its unique features for studies at household and dyadic link level. Chapter 3 The growth rate of gift and festival spending in some developing countries has been much higher than that of consumption and income. I test three competing explanations of the phenomenon-peer effect, status concern, and risk pooling-based on the IFPRI-CAAS and the gift network data. I find that gift-giving behavior is largely influenced by peers in reference groups. Status concern is another key motive for keeping up with the Joneses in extending gifts. In contrast, risk pooling does not seem to be a key driver of the observed gift-giving patterns. I also show that large windfall income triggers the escalation of competitive gift-giving behavior. Chapter 4 Despite the resultant disutility, people are still engaged in behavior carrying social stigma. Empirical studies on stigma behavior are rare, largely due to the formidable challenges of collecting data on stigmatized goods and services. Combining the IFPRI-CAAS and the gift network data, I examine frequent blood sales, widely regarded as a stigmatized behavior and the driving force of public health crises. Using a novel spatial identification strategy, I find social interactions with heterogeneous intensities affect plasma sales decisions. Peer effects are directional and work through preference interactions that reduce stigma. Families with unmarried son are more likely to sell plasma to offset costs of getting married in a tight marriage market, such as a bigger house, a higher bride price and a more lavish wedding banquet. Chapter 5 Participating in and presenting gifts at funerals, weddings, and other ceremonies held by fellow villagers have been regarded as social norms. However, it is more burdensome for the poor to take part in these social occasions than the rich. Because the poor often lack the necessary resources, they are forced to cut back on basic consumption, such as food, in order to afford a gift to attend the social festivals. Using the IFPRI-CAAS and the gift dataset, this chapter shows that children born to mothers in poor families who are exposed to a greater number of ceremonies during their pregnancies are more likely to display a lasting detrimental health impact.