Primitivism In Modernist Literature: A Study Of Eliot, Woolf And Lawrence 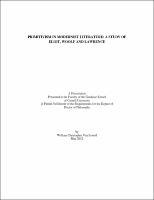 The subjects of "civilization" are trapped in an alienating, inauthentic culture, but can escape by cultivating the "primitive" hidden within themselves: grotesque, even terrifying, but authentic in its drives, desires and relationship to the world. Known as primitivism, this diagnosis of cultural failure and its purported cure profoundly influenced modernist artists. Beyond the succès de scandale they enjoyed by inverting the hierarchy of savage and civilized, primitivists claimed to speak from a position that was, as Eliot put it, "deeper" and "older" than - and uncontaminated by - their culture. They plumbed an unchanging, inner essence, of which they saw glimpses everywhere from ancient artifacts and African masks to drawings by children and mental patients. The rediscovery of primitive mentality thus promised to overcome modernity's characteristic epistemological anxiety - what James Clifford called "off-centeredness in a world of distinct meaning systems." Yet while primitivism revalued the stereotype of the savage and prized the primitive as mysterious and unknowable, it never overcame the objectifying view that "primitives" were fundamentally all the same, and important primarily as a window onto suppressed aspects of the civilized personality. Primitivism informed (and in some cases deformed) Eliot's, Woolf's and Lawrence's critical social theories, their justifications for writing and publishing, and their understanding of their own aesthetic projects. These writers were preoccupied with the conflict between their need for authentic, radical expression, and their relationship to the public. Primitivist aesthetics justified their art as a spiritual and societal necessity and shielded it from attack as mere neurotic acting-out. Further, each writer drew on primitivist discourse to develop theories of literature and the artistic impulse, from Eliot's theories of poetic imagination to his and Woolf's ideas of the importance of "impersonality." At critical moments in their creative lives, including the writing of "The Waste Land," The Voyage Out, and The Plumed Serpent, primitivism enabled these writers to set the criteria by which their writing should be understood.