Sexed Being And The Limit: Writing Transgender Subjectivity 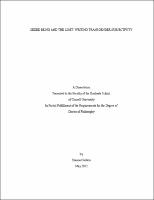 My dissertation, "Sexed Being and the Limit: Writing Transgender Subjectivity," draws on French medieval and early modern literature, contemporary United States memoir, and the discourses of gender studies, Lacanian psychoanalysis, and queer theory, to argue for an understanding of "transgender subjectivity" that would be irreducible to the fields of "sex," gender identity, or gender expression. I suggest that we may read the cross-dressed or "transgender" characters of the French medieval texts I consider as allegorical subjects, or subjects whose "subjectivity" is manifested in the texts' portrayals of these characters' encounters with the limits of language. By "the limits of language," I mean to refer to the ways in which language introduces into subjective existence both an intractable limit and, at the same time, an excess which language itself cannot fully treat. Each medieval text, I argue, stages its inability to explain the "sexed being" of the trans character in question in scenes that explore the limits of language (scenes of voice, silence, naming, re-naming, or deception, limits that are both painful and enabling). I suggest that transgender subjectivity can be understood as a particular response to language's inability to explain the "sexed being" of the subject, a response which orbits the paradoxical status of language and its limits.