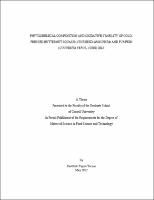 Pumpkin (Cucurbita spp.), a crop native to America, represents a profitable opportunity in the Northeast. In the US, production of pumpkin has expanded greatly particularly in Illinois, Michigan, Pennsylvania, New Jersey and New York. With the appreciable volume of production intended mainly for utilization of the flesh for food processing, it is also expected that significant amounts of seeds, as part of the processing wastes, are being generated. Pumpkin seeds have been reported to contain a significant amount of highly unsaturated oil. Therefore, utilization of pumpkin seeds for oil production may add value to this crop and could help reduce food-processing waste. We studied the phytochemical composition, oxidative stability and behavior of the natural antioxidants of cold-pressed pumpkin (PSO) and butternut squash (BSO) seed oils. Experiments included quantification of carotenoid, tocopherol and phenolic content by HPLC analyses and determination of the effect of packaging light transmission properties and storage temperatures on the oxidative stability of the oils and the retention of their major antioxidant compounds. The predominant carotenoid in BSO was -carotene (21.8 mg/kg) while lutein+zeaxanthin (16.76 mg/kg) was the most abundant in PSO. [alpha]-carotene and cryptoxanthin were detected at lower concentrations but the latter was not detected in BSO. The total carotenoid content of PSO (32.4 mg/kg) was slightly lower than that of BSO (27.1 mg/kg). Significant concentrations of tocopherols ([alpha], [gamma], and [delta]) were found with [gamma]-tocopherol showing preponderance (>90%) in both oils. The total tocopherol content of BSO (563 mg/kg) was not significantly different compared to that of PSO (553 mg/kg). Two isomers ([gamma] and [delta]) of tocotrienol were also detected. The individual phenolics were tyrosol, luteolin, vanillin, vanillic acid, and trans-cinnamic acid. The oils were stable for at least 20 weeks when stored in amber bottles at temperature below 300C and we estimated a shelf-life for both oils of over 15 months based on accelerated storage test. Oxidation was most pronounced in clear bottles while green bottles provided only partial protection when exposed to 15W fluorescent light at 200C. The antioxidant compounds were better retained in amber bottles while significant reductions (p<0.05) were observed in clear and green bottles. The relative stability of the compounds was: -tocopherol > -tocopherol; lutein > -carotene. Phenolics exhibited only minor losses suggesting excellent stability of these compounds. Because of their high content of natural antioxidants and good storage stability, cold-pressed butternut squash and pumpkin seed oils demonstrate potential for valueadded uses such as production of specialty oils as natural sources of dietary antioxidants and in pharmaceutical and cosmetic applications. ii