The Revolution Will Be Televised: Afro-Brazilian Media Production In Sxc3Xa3O Paulo, Brazil 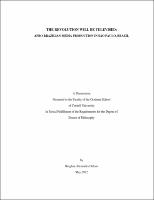