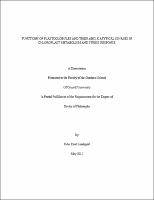 The plastoglobule (PG) is an enigmatic lipoprotein particle in photosynthetic and nonphotosynthetic plastids in plants. In chloroplasts, PGs are attached to the thylakoid membrane, providing a dynamic reservoir for prenyl- and neutral-lipids and a small set of proteins. Identification of the PG proteome suggests an active role for PGs in chloroplast metabolic processes. However, the majority of the proteins of the PG have not been characterized, making a comprehensive understanding of PG function difficult. The objective of this dissertation was therefore to clarify the functional role of the PG in chloroplasts. The PG proteome from Arabidopsis thaliana leaf chloroplasts was determined by mass spectrometry of isolated PGs and quantitative comparison with the proteomes of unfractionated leaves, thylakoids and stroma. This refined PG proteome consisted of 30 proteins, including 6 ABC1K atypical kinases and 7 fibrillins together comprising more than 70% of the PG protein mass. Compared to previous PG proteome analyses, several proteins were excluded and six new PG proteins were identified, including an M48 metallopeptidase and two additional ABC1K atypical kinases, confirmed by immunoblotting. A genome-wide co-expression network for the PG genes was constructed from mRNA expression data revealing a network with four distinct modules that each contain at least one ABC1K and/or fibrillin gene. Each module showed clear enrichment in specific functions, including chlorophyll degradation/senescence, isoprenoid biosynthesis, plastid proteolysis and plastid redox and kinase regulators of electron flow. A new testable model for the PGs is presented, in which sets of genes are associated with specific PG functions. The PG is proposed to serve as a thylakoid membrane microdomain, recruit ing low-abundant proteins into physical proximity facilitating specific metabolic reactions and physiological responses, comparable to lipid rafts of plasma membranes. Extensive phylogenetic evidence for the ABC1K family showed their ancient origin prior to the archaea-bacteria split and organization into three primary clades characterized by evolutionary origin and sub-cellular localization; ABC1Ks appear to have been introduced into photosynthetic eukaryote genomes through both plastid and mitochondrial endosymbiosis. Hypothesized functions of the PG-localized ABC1K1 and ABC1K3 as regulators of chloroplast prenyl-lipid metabolism are investigated. It was found that A. thaliana T-DNA insertion single (abc1k1 and abc1k3) and double (k1k3) mutants have a dose dependent, conditional light stress phenotype manifested as leaf degreening and necrosis; the minimal threshold for the visible phenotype is lower in the double mutant than either single mutant, suggesting additive or synergistic roles for each gene in the adaptation to excess excitation energy. Light stress treatments of k1k3 also resulted in granal hyperstacking and the altered size, number and morphology of PGs as compared to the wild-type indicates an increased ratio of prenyl- to neutral-lipid in PGs. Comparison of metabolite and protein compositions in wild-type and k1k3 leaves revealed reduced accumulation of PG-localized carotenoid cleavage dioxygenase 4 and altered levels of various prenyl-lipids in k1k3, supporting a regulatory role for ABC1K1 and ABC1K3 in prenyl-lipid metabolism as an adaptation to excess excitation energy. Finally, based on the coexpression, phylogenetic and phenotypic mutant analyses, targets of ABC1K1 and ABC1K3 are hypothesized.