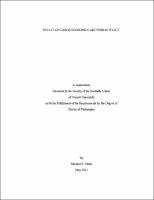 The main component of this thesis, found in the first chapter, is an investigation of earnings instability, which can be thought of as the fluctuations around permanent earnings over time of a worker's labor market earnings. This chapter reflects my interests in labor economics and in economic analysis using longitudinal, linked worker-firm data. The instability of labor earnings in the United States contributes to earnings inequality and may diminish household welfare. Despite the importance of earnings instability little is known about its correlates or causes. This study seeks to better understand whom earnings instability affects and why it affects them. Using both parametric and semi-parametric techniques, I provide an in-depth investigation into the relationship between earnings instability and worker skill. I find that earnings instability follows a U-shape over skill, with low-skill workers experiencing the least stable earnings, middle-skill workers experiencing the most stable, and high-skill workers falling in between the two. This finding is robust to a number of controls, sample selections, and other statistical concerns, and is not driven by workers entering and leaving employment, changing jobs, or holding multiple jobs. I then investigate whether firm characteristics affect the stability of worker earnings. I am the first to directly test the relationship between earnings instability and firm employment instability using linked employer-employee data. I find a positive and statistically significant relationship between the two that remains when the effect is estimated using only within-firm variation. This suggests that the effect is a feature of the way workers are being paid by their employer. The size of the effect varies by a worker's position in the earnings distribution: low-earning worker are passed a greater share of firm employment instability than higher-earning workers. This finding helps to explain the left tail of the U-shape of earnings instability over skill. I find significant heterogeneity in the magnitude and significance of the effect across industries and explore how the competitiveness of an industry relates to the size of the industryspecific effect. My interest in the economics of education is reflected in the second essay of this thesis, which studies a public policy innovation using administrative records. The effects of single-sex education are hotly contested, both in academic and policy circles. Despite this heated debate, there exists little credible empirical evidence of the effect of a U.S. public school's decision to offer single-sex classrooms on the educational outcomes of students. This study seeks to fill this hole. Using administrative records for third through eighth graders in North Carolina public schools, the chapter finds evidence that the offering of single-sex mathematics courses is associated with lower performance on end-of-grade math exams, and finds no evidence that the offering of single-sex reading scores increases performance on reading exams. Evidence of significant heterogeneity in the effect across schools is also presented. Finally, my interest in public policy is further reflected in the third chapter of this thesis, coauthored with Donald Morgan and Ihab Seblani. Despite a dozen studies, the welfare effects of payday credit are still debatable. We contribute new evidence to the debate by studying how payday credit access affects bank overdrafts (such as returned checks), bankruptcy, and household complaints against lenders and debt collectors. We find some evidence that Chapter 13 bankruptcy rates decrease after payday credit bans, but where we find that, we also find that complaints against lenders and debt collectors increase. The welfare implications of these offsetting movements are unclear. Our most robust finding is that returned check numbers and overdraft fee income at banks increase after payday credit bans. Bouncing a check may cost more than a payday loan, so this finding suggests that payday credit access helps households avoid costlier alternatives. While our findings obviously do not settle the welfare debate over payday lending, we hope they resolve it to some extent by illuminating how households rearrange their financial affairs when payday loan supply changes. In summary, this thesis nicely reflects my interests in labor economics, public policy, economic analysis using linked and administrative data, and education economics, and the econometric and research skills I have acquired during my five years as a graduate student in economics at Cornell.