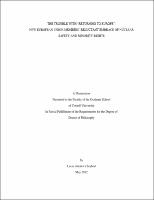 Why do some norms make international advances more easily than others? What do nuclear safety and human rights have in common? Norms do not simply spread, they are adopted by governments and internalized by societies and while both steps are necessary for norm promotion, neither is sufficient. My argument disputes the dichotomy implicit in existing literature between "enlightened" civil society and norm-violating governments and suggests that often the roles are reversed. I also challenge the notion that once norms reach the international realm, their evolution stops. I test the theory by applying it to the 2004 enlargement of the European Union (EU), in which policies were presented to the acceding Eastern European states in a non-negotiable package deal. The primary, and contrasting case studies are in nuclear safety and ethnic minority rights, both of which have met only intermittent success but each for different reasons. The dissertation combines two levels of comparison - between norm types and across countries (Lithuania, Slovakia, Czech Republic). I use a mix of quantitative (computer-assisted text analysis, factor analysis) and qualitative methods. In terms of boarder impact, the project develops the norm promotion angle to assess the legitimacy of conditionality arrangements, which international institutions impose on divided and relatively resource-poor societies.