Love, Partiality, And Morality: An Analysis Of Thomas Aquinas'S Theory Of Love 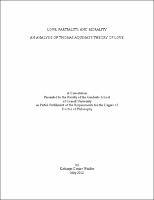 Philosophers convinced by Bernard Williams that there is a potential psychological conflict between the demands of love and the requirements of morality have approached the problem in various ways. The objective of this dissertation is to rehearse some of the ways in which contemporary philosophers have attempted to resolve the potential conflict with respect to love in some of its various forms and to show how each attempt to do so ultimately fails. Then I develop and defend an alternative theory of love and its motivations found in the work of Thomas Aquinas. The dissertation is devoted to the examination of some of the most compelling contemporary approaches to addressing the potential conflict between the goals and special relationships which provide our lives with meaning, and the so -called moral point of view which is understood to be impersonal and impartial. I attempt to show what is compelling about each approach to the problem, but argue that each one ultimately fails to resolve the problem satisfactorily. I shall then show how Aquinas's more comprehensive theory of the relation between certain forms of love and morality addresses the potential worry by showing how, on his account, the love characteristic of friendship is at once personal and partial and yet deeply moral. Hence, on his account there is no potential conflict between the special relationships which provide one's life with meaning and purpose and the requirements of morality. Love, according to Aquinas, in a certain sense grounds morality and provides us with normative reasons for promoting the good of certain other persons as part of promoting one's own good and the good in general. In the final chapter I show that although the love characteristic of friendship is personal and partial, the highest form of love-caritas or the love characteristic of friendship toward God-is at once partial insofar as it entails normative reasons for prioritizing certain rel ationships over others, and yet impartial insofar as it entails loving all persons as possessing intrinsic value as creatures made in God's image and loved by God.