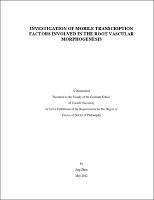 Vascular system plays an essential role as conductive and supporting machinery in the majority of land plants. Xylem and phloem, major tissues in the vascular system, are generated from vascular stem cells in a strictly organized fashion. Their patterning requires extensive cell-to-cell communications that have been remained largely unknown. In this dissertation, I present the discovery of two developmental programs that require the cell-to-cell movement of transcription factors. One finding came out while screening the phenotype of knockout mutants of transcription factors that are expressed in the vascular cell type enriched manner. I found two closely related AT-hook family members AHL3/4 whose knockout mutants result in abnormal xylem patterns in the root. Interestingly, AHL4 proteins move from procambium cells to xylem precursors in the root. Our studies suggest that cell-to-cell mobility of AHL4 is required for defining the cell type boundaries. In addition, AHL4 forms protein complexes with its closest homolog AHL3. Together, I proposed that AHL4 and AHL3, moving from the procambium to xylem precursors, define the boundaries between the two tissues and restrict the expansion of a xylem domain to procambium. The other finding involves the SHR regulation on the phloem patterning in two distinct pathways, both of which require the cell-to-cell movement of SHR. The companion cell formation is mediated by the SHR-miR165/6 pathway that requires SHR to move to the endodermis. Meanwhile, the cell division for sieve element formation is mediated by the SHR moving into a phloem initial from procambium. By combining a cell sorting/microarray facilitated genome-wide expression profiling method with the high-resolution genome-wide root expression map, I found that a novel regulator NARS1, an NAC domain transcription factor, controls sieve element division as downstream of SHR. Plant morphogenesis is a highly organized process that largely relies on positional information. Such positional information is established by cell-to-cell communication which turns on cell-type specific regulatory networks temporally and spatially. My study reveals novel cases where transcription factors that move between cells act as important informants during vascular tissue patterning. This further broadens our understanding of molecular mechanisms underlying a key developmental innovation in plant evolution.