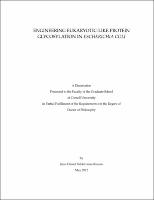 N-linked glycosylation is a common protein post-translational modification where glycans are attached to asparagine residues located on a consensus sequence. Structure of these glycans varies widely among species, which is of particular importance given the role that glycans play on protein folding, functionality and recognition. Notably, glycans are often necessary to maintain stability and efficacy of therapeutic proteins in the human body. Production of therapeutic glycoproteins in Escherichia coli has the potential to become a flexible and relatively cheap alternative to current production systems, even though E. coli has no native protein glycosylation machinery. Recently, the glycosylation machinery from Campylobacter jejuni, a gram negative bacterium, was transferred to E. coli, making protein glycosylation possible for the first time in this host. Unfortunately glycans synthesized by C. jejuni, and bacteria in general, are not appropriate for use in human therapeutics, hence engineering the synthesis of human-like glycans in E. coli becomes necessary. This study is focused on recombinant expression and engineering of eukaryotic glycosyltransferases to enable E. coli to synthesize eukaryotic-like glycans suitable for in vivo production of therapeutic glycoproteins. Initially, we expressed glycosyltransferases from Saccharomyces cerevisiae (Alg13, Alg14, Alg1 and Alg2) for the synthesis of a core glycan structure (trimannose core) common to many human glycans. Later, the work was ori- ented towards the extension of this trimannose core for production of authentic human-like glycans and improvement of the current system using directed evolution of glycosyltransferases. In the future, we expect to be able to produce glycosylated proteins in vivo, displaying fully sialylated human-like glycans.