A Fairer House Than Prose: Verse And Its Others In American Poetry, 1850-1950 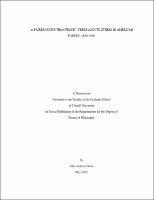 A Fairer House than Prose: Verse and Its Others in American Poetry, 1850- 1950 traces the shifting meanings of the seemingly self-evident terms verse and prose, and argues that nineteenth- and twentieth-century American poetry marks a peculiarly rich and active moment, during which the boundaries between verse and prose were repeatedly renegotiated, elided, and exploited. The verse-prose distinction is seen as both a formal concern, with the rise of free verse and the prose poem threatening to unsettle each side of the divide, and a philosophical distinction with broader rhetorical stakes, as modernity comes to be seen as essentially prosaic. The poets most deeply involved in these renegotiations-Laura Riding, William Carlos Williams, and Gertrude Stein among others-had widely divergent aims and poetic principles; nevertheless, their shared interest in the margins between verse and prose can be read as a critical response to the philosophical truism that modernity is "prosaic," and its corollary that prose, not verse, is the mode of language most adequate to giving an account of the modern world. The chapters examine how three genres at work in the margins of the verseprose distinction- the prose poem, prosimetrum, and the genre I call the prosed poem-offer important insights into aesthetic developments of the time. The chapters also address methodological difficulties in examining formal effects characterized by the removal or avoidance of poetic shaping, a phenomenon I refer to as "subtractive form." A theoretical conclusion traces the critical genealogy of the conflation of prose with modernity in much continental philosophy and critical theory backwards through Walter Benjamin and German Romanticism. In looking through the eyes of Williams, Riding, Stein, and others at the shifting valences of prose, verse, and their various intermixtures, I argue, we must arrive at a less reassuring picture of our grasp of modernity, and may in turn better understand how poets wrestling with the essence of their medium may engage in more open-minded, active philosophical thinking about modernity than some of its most influential chroniclers and theorists.