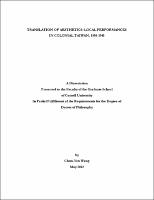 This dissertation examines "the multitude" and "the local" in Jingju and Gezaixi in Colonial Taiwan, looking into the way in which how local performances of such transcend colonially political boundaries, colonized intellectuals' imagination of people, and identity politics embedded in the Xiqu epistemology. By analyzing the transformation of "the theatrical" from the colonial period to the postwar period, the dissertation also argues that cultural materiality matters in looking at aesthetics, and asserts that aesthetical imagination derives from epistemological discourse. The Xiqu epistemology is formed in racialization in relation to imperialism and colonialism. This is to say that colonial modernity "creates" traditional drama by distinguishing from modern drama. The dissertation begins with critiquing colonial modernity by locating xiqu performances in the regime of cultural translation, and suggests an episteme and political imagination that are not subject to colonial modernity by looking into Baizixi and Gezaixi. It follows to analyze the way in which local performances transcend the limits of ethnicity and language by discussing the relationship between Jingju and Taiwanese islanders. The dissertation argues that two concepts of ethnic performance and local identity emerge along with nationalist discourse that reacts against yet paradoxically reproduces the colonialist-modern episteme by examining the transformation of Jingju in the postwar Taiwan. I conclude the dissertation with questioning the imagination of subjectivity of Taiwanese culture that come into being in the formation of colonial modernity by investigating the Reformed drama of Gezaixi in relation to national realism in the wartime period. The dissertation challenges colonial modernity that functions as an epistemology that is at the same time colonial and anti-colonial, imperial and national. By redefining xiqu as local performances that do beyond national/racial/ethnic identity, I map out a picture of the discursive relation between nation and aesthetics, history and knowledge, and performance and ethical-politics since 1895 when Taiwan is incorporated in the modern structure of the global.