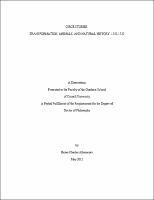 This dissertation argues that works by authors including Gelli, Spenser, Milton, and Swift participate in a previously overlooked tradition of transformation stories, flourishing from the Renaissance to the eighteenth century and re-deploying representations of animals from natural histories. This tradition derives from the innovative re-telling of Homer's Circe episode in Plutarch's dialogue "Bruta Animalia Ratione Uti," featuring Gryllus, a former human who prefers to be a pig. Comparing sixteenth-, seventeenth-, and eighteenth-century analogues of Gryllus with representations of animals in natural histories reveals that the Plutarchian literary tradition functions as a major vehicle for arguments about the human/animal relationship, from Gelli's Circe (1549), through book 2 of Spenser's Faerie Queene (1590) and Milton's Comus (1634), until the parodic treatment of the Plutarchian tradition in Swift's Gulliver's Travels (1726). Often critiquing forms of anthropocentrism, the works of the Plutarchian tradition draw on representations of animals in natural histories in order to define the meaning of characters who desire transformation between human and animal states. Furthermore, new understandings of individual works can be achieved by locating them within the larger literary tradition in which they participate.