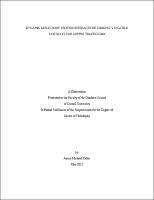 As part of intracellular copper trafficking pathways, the human copper chaperone Hah1 delivers Cu+ to the Wilson's Disease Protein (WDP) via weak and dynamic protein-protein interactions. WDP contains six homologous metal binding domains (MBDs), connected by flexible linkers, which all can receive Cu+ from Hah1. The functional roles of the MBD multiplicity in Cu+ trafficking are not well understood. Building on our previous study of the dynamic interactions between Hah1 and the isolated 4th MBD of WDP, here we study how Hah1 interacts with MBD34, a double-domain WDP construct, using single-molecule fluorescence resonance energy transfer (smFRET) combined with nanovesicle trapping. By alternating the positions of the smFRET donor and acceptor, we systematically probed Hah1-MBD3, Hah1-MBD4, and MBD3-MBD4 interaction dynamics within the multi-domain system. We found that the two interconverting interaction geometries were conserved in both intermolecular Hah1-MBD and intramolecular MBD-MBD interactions. The Hah1-MBD interactions within MBD34 are stabilized by an order of magnitude relative to Hah1 interactions with the isolated single-MBDs, and thermodynamic evidence suggests that Hah1 can interact with both MBDs simultaneously. We proposed 2-body and 3-body interaction models based on previously known structures of homologous proteins to describe both intermolecular Hah1-MBD and intramolecular MBD- MBD interactions. These interaction models and our smFRET results were then used to formulate and quantify a comprehensive Hah1-MBD34 mechanism. The enhanced interaction stability of Hah1 with the multi-MBD system, the dynamic intramolecular MBDMBD interactions, and the ability of Hah1 to interact with multiple MBDs simultaneously suggest an efficient and versatile mechanism for the Hah1-to-WDP pathway to transport Cu+.