Examining The Role Of Redox Biology In A Population Of Neonatal Cardiac Precursor Cells Marked By The Type Iii Receptor Tyrosine Kinase, C-Kit 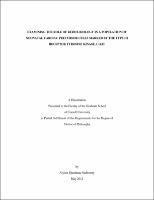 Owing in large part to the low regenerative capacity of the heart, cardiovascular disease (CVD) remains a leading cause of morbidity and mortality worldwide. Compelling evidence suggests the presence of resident cardiac precursor cells (CPCs) in the neonatal and, to a lesser extent, in the adult myocardium. These CPCs are identified based on specific marker expression including c-kit, a type III receptor tyrosine kinase. Here we report the isolation and characterization of neonatal c-kit+ CPCs from a bacterial artificial chromosome (BAC) transgenic mouse in which enhanced green fluorescent protein (EGFP) is driven by the kit locus. We demonstrate that c-kit expression identifies CPCs capable of expanding and differentiating into all three cardiac lineages. In addition, we establish that this mesodermally derived cell population comprises a mixture of precursors and more mature cells in the early stages of lineage commitment. Progressing from the identification of CPCs, cell-based therapy has emerged as a strategy for cardiac repair. However, the pathological environment of the infarcted heart, attributed in part to the production of reactive oxygen species (ROS), impedes transplanted cell survival. In spite of well-known pathological roles, ROS also participate in normal cell development and recent research indicates that redox state is a critical regulator of precursor cell function. Because the NADPH oxidases (Nox) are a major source of ROS in the heart, a significant amount of research has been conducted to elucidate roles for these enzymes in cardiomyogenesis and heart failure. However, little research has been directed at the function of Nox enzymes in CPCs. As a successful cell-based therapy requires both the survival of transplanted cells and their differentiation into cardiomyocytes, understanding the mechanisms of ROS signaling in CPCs is critical. Therefore, utilizing genetic tools to manipulate the Nox enzymes of neonatal c-kit+ CPCs, I demonstrate that specific cardiac Nox homologues are critical modulators of c-kit+ cell precursor and differentiation status. I speculate that these and other redox genes identified by messenger RNA (mRNA) arrays will provide novel targets for improving the regenerative capacity of c-kit+ CPCs, which can later be integrated into cell-based therapies for myocardial infarction (MI).