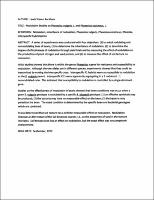 A series of experiments was conducted with four objectives: (1) to select nodulating and nonnodulating lines of beans, (2) to determine the inheritance of nodulation, (3) to determine the degree of effectiveness of nodulation through yield trials and by measuring the effect of nodulation on the production of plant nitrogen and seed protein, and (4) to measure the effect of soil texture on nodulation. Initial studies showed that there is within the genus Phaseolus a gene for resistance and susceptibility to nodulation. Although the two alleles are in different species, experiments showed that they could be transmitted by making the interspecific cross. Interspecific F1 hybrids were as susceptible to nodulation as the P. vulgaris parent. Interspecific F2's were apparently segregating in a 3 nodulated : 1 nonnodulated ratio. This indicated that susceptibility to nodulation is controlled by a single dominant gene. Studies on the effectiveness of nodulation in beans showed that three conditions may occur when a given P. vulgaris genotype is nodulated by a specific R. ohaseoli genotype: (1) an effective symbiosis may be produced; (2) the bacteria may have no measurable effect on the bean; (3) the bacteria may parasitize the bean. The exact condition is determined by the specific bean and bacterial genotypes which are combined. It was determined that soil texture has a definite measurable effect on nodulation. Nodulation improves as the texture of the soil becomes coarser, i.e., as the proportion of sand in the mixture increases. Soil temperature has an effect on nodulation, but the exact effect was not completely characterized.